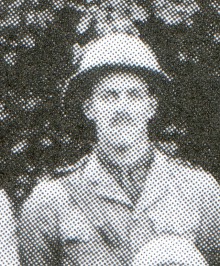 Other service during World War One
Information from Medal Index Cards (WO372), Medal Rolls (WO329), Service Records (WO363) and/or Pension Records (WO364) held by The National Archives.
Pre-war Occupation*/marital status**
Trade or Occupation pre-war: Civil servant - clerk
Marital status: Single
* Taken from attestation papers or 1911 census
** Marital status on enlistment or at start of war