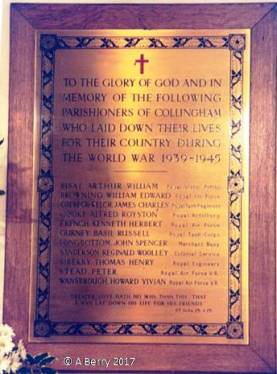 Reginald Wooley Sanderson was born on the 5th January 1897 in Garforth, Yorkshire but by the census date in 1911 he was living at 11 Grange Avenue, Chapeltown Road, Leeds. At some time his parents, Henry and Edith moved to Fairlea, Collingham.

Reginald served in the First World war but survived, albeit injured and being invalided out of the army. However we commemorate Reginald here as he is named on the Second World War village memorial in St. Oswald's Church having been killed in 1940.

He first attested in WW1 as a private in the 28th London Regiment (Artists Rifles) on the 6th December 1915. His regimental number was initially 6522, but later changed to 761380. On the 10th January 1916 Reginald transferred, at his own request, to the 2nd Battalion London Regiment and later was transferred to the 1st Battalion. Later, on the 2nd August 1917, Reginald was commissioned and posted as a 2nd Lieutenant to the 7th Battalion East Surrey Regiment. It was while serving with this regiment that Reginald was injured with a severe gun shot wound to the hand and chest just outside Cambrai, France. Reginald was evacuated from France and was treated at the 3rd General Hospital in Oxford. His wound was severe enough that he was invalided out of the Army being awarded a Silver War Badge on the 10th April 1918.

After the First World War, Reginald became a Civil Servant and became the Deputy Chief Inspector of Labour for Gold Coast (now Ghana). Between 1921 and 1940, Reginald made numerous trips back and forth to Gold Coast, nearly always sailing from Liverpool to Sekondi or Takoradi, in Gold Coast.

It was on the 26th July 1940 that Reginald was on board the Merchant Vessel Accra on his way back to Ghana, following a trip home, when the ship was torpedoed by the submarine U34 under the command of Korvettenkapitan Wilhelm Rollman. The Accra was on its way from Liverpool to West African ports and had reached a point 300 miles west of Ireland when she was hit by one of three torpedoes fired by the U-boat. The Accra was carrying 333 passengers and 163 crew. The ship sank within a half an hour, but all the lifeboats had been successfully launched. Unfortunately one motor lifeboat capsized in the choppy seas and 11 passengers and 8 crew were lost. One of the lost was Reginald Wooley Sanderson.