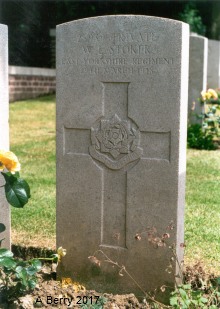 William Lee Stoker was born in Collingham on the 3rd April 1891, the son of Alfred and Hannah Stoker. William was baptised in St.Oswald's church on the 26th April 1891 and was later confirmed in Wetherby on the 18th February 1907 along with Alan Wilson and Raymond Johnson.

In 1910, on the 13th June, William married Annie Elizabeth Thirlwall in St. Oswald's church, and they had two children, Dorothy Gertrude Stoker and Kathleen Margery Stoker. On census day 1911, William was living at 8 Rider Place, Collingham with his wife and daughter, Dorothy.

William served with the 8th Battalion East Yorkshire Regiment and first went to France around December 1916.

William was killed on the 29th March 1918 and is buried in Hermies Hill British Cemetery, France.

The Wetherby News reported on 19th April 1918: "Official intimation was received on Tues of the death in action, in France, on March 29th, of Private William Lee Stoker, of School Lane, Collingham. Private Stoker was home on leave a recently as February, returning to the front on the 22nd. He went out to France in December 1916, and would have been 28 years of age on April 3rd, five days after he met his death. Deceased leaves a widow and two children, and a widowed mother, to mourn his loss. A brother-in-law of the deceased, Gunner Geo. Elliot Dawson, was seriously wounded on the 3rd November 1917, and died two days after. Pte. Stoker was of a bright and cheerful disposition, and was well liked by all who knew him. He was formerly employed by Mr Arthur Smith, draper and outfitter, of Collingham and Leeds, as a warehouseman."

William's brother in law was George Elliott Dawson who also gave his life in the Great War.