The men of Collingham and Linton who fell in the various armed conflicts of the 20th Century are commemorated on a number of memorials in the villages. 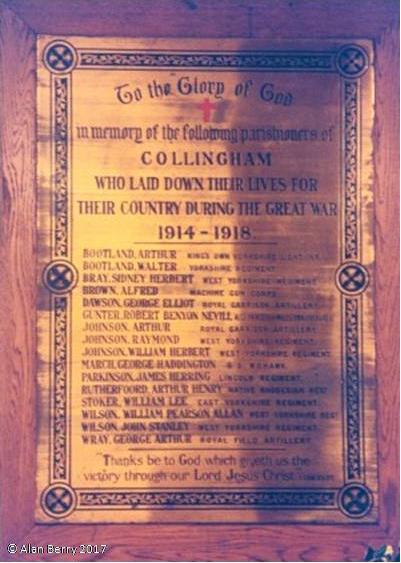 In Collingham, a memorial tablet of bronze set in wood, commemorating those men of the parish who died in the First World War, is to be found on the north wall of the nave of St. Oswaldâs Church between the first and second windows from the west end of the church. This memorial was first proposed at a Church Vestry meeting held at 7.15pm on Thursday January 29th 1920 chaired by the vicar, H.B. Beckwith with Messrs T.M. Twidale (Peopleâs Warden), Alf Cooke, Irwin Daniel, R.C. Davies, and W. Wray, and news of the idea was spread to the village on the 9th April 1920 when a short item was published in the Parish Magazine.

It is proposed to place a tablet with a list of Collingham soldiers who have fallen in the war either in the church or in the churchyard. The whole matter is being carefully discussed, and it is desired to ascertain and comply with, as far as possible, the wishes and feelings of the near relatives of the fallen. A sum of money is being raised to pay for the tablet, and so far the following sums have been received:
Easter Collection £18 1s 4d
Womenâs War Work £16 17s 0d
Miss Dalby £ 1 1s 0d
Mr and Mrs Bootland 10s 0d
Mrs Levitt 5s 0d
Mr RW Midgley 5s 0d
Sale of violets per Miss Bath 3s 0d
Mrs Hague 2s 0d
Mr Oswald Vincent 2s 0d
Total £37 6s 4d

In the meantime, the Faculty to allow the placing of the memorial in the church was granted to the vicar and the church wardens, Frederick William Dalby and Thomas Marritt Twidale by the Bishop of Ripon on 1st March 1920. The memorial was made by Mr C.H. Wynne of Leeds and commemorates the 16 Collingham men who were killed during the Great War. The inscription reads âTo the Glory of God, in memory of the following parishioners of Collingham who laid down their lives for their country during the Great War, 1914-1918â. It was unveiled and dedicated at a special service held in the afternoon of Sunday 14th March 1920. The service opened with the hymn âBrief life is here our portionâ, and was followed by prayers taken from a special form of service including the 124th Psalm commencing âIf the Lord Himself had not been on our sideâ. The lesson was taken from the Song of Solomon and was read by the Rev. Hy. Scott, Weslyan minister, and was followed by the hymn âLet saints on earth in concert singâ. The unveiling and dedication was performed by the Rev. Canon Lascelles, Vicar of Harewood. The list of names was read by the Rev Scott and he concluded by an address in which he spoke of the spirit in which Collingham should try to carry on the memorial. After the Nunc Dimitis, the Rev Canon Lascelles preached a sermon based on the text of Romans VIII, 38-39, âFor I am persuaded, that neither death, not life, nor angels, nor principalities, nor powers, nor things present, nor things to come, nor height, nor depth, nor any other creature, shall be able to separate us from the Love of God, which is in Jesus Christ our Lordâ. He spoke of the losses sustained by parents, friends, and relatives of the dead, but âtheir happiness in knowing that they had done their dutyâ. 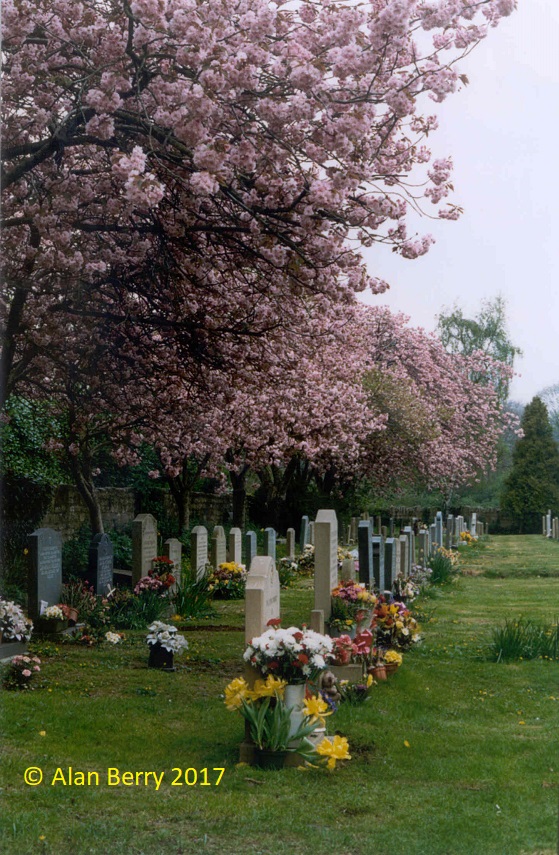 A second memorial tablet is also to be found in Collingham church, to commemorate those men of the village who fought and died in the Second World War. Following this conflict, in 1948, the Parochial Church Council discussed a proposal to place a second memorial in the church to commemorate those parishioners who had fallen in the 1939-1945 conflict. After a number of enquiries about the design of the new tablet, a design for a brass tablet framed in wood in a style to match the 1914-1918 tablet was approved by the PCC at its meeting of 31st May 1949, and the vicar, the Rev. Unthank, and the churchwardens applied for a new Faculty from the diocese to move the existing tablet and to erect a new Second World War memorial. The estimate for the work was Â£48 and the PCC proposed to launch an appeal for the money. By December 1949 Â£84 had been raised by subscriptions and the tablet was almost ready for mounting and dedication. There were long discussions at PCC meetings to plan when the dedication service would be held. One problem discussed was the type and position of the shelf for flower vases which was proposed to be placed under the memorial tablets. Eventually the PCC failed to reach a decision and the vicar proposed the setting up of a special committee to decide the matter! By February 1950, the tablet was ready to be dedicated and it was decided to ask Dr Lawson to perform the unveiling. The dedication service took place on Sunday 30th April 1950. This tablet names the 11 village men who gave their lives in the Second World War. The church was packed for the service which started with Lessons read by Mr C.W. Mason and Mr A.J. Elston and prayers said by the Methodist Minister, the Rev. J.F. Jones. The dedication was performed by The Rev. J.B. Unthank and a wreath was laid, on behalf of the British Legion by Mr G Forster of Linton. In his address, the Rural Dean, the Rev. H.H. Griffith, Vicar of Harewood said that âevery day should be a day of remembrance of the cause for which so many lives were sacrificed. Loss of memoryâ, he said, âwas serious in the individual, but was much more serious in the Nation, and he was aghast when he looked around and saw everywhere so many people living for themselves and with no thought for others, and the crime and cruelty rampant. The battle for peace and happiness and against war must be fought, and there was a power in the human soul that was greater than that of the hydrogen bomb with its menace to mankindâ.

At the time of its unveiling, subscriptions towards the Second World War Memorial Tablet stood at Â£85/6/6, a balance in the bank of Â£26/19/4 after all expenses had been paid. Subsequent PCC meetings decided that some of this money should be spent in moving the British Legion Flags and lighting the memorial tablets, and any excess money should then be spent on planting a row of double flowering cherry trees in the churchyard. These trees were purchased and planted along the west edge of the churchyard in December 1950 where they still form a wonderful spectacle each year.

Another obvious memorial in Collingham to the parishioners killed in the Great War is the Memorial Hall. Just over a month after the Great War had ended, on Tues 17th December 1918, a public meeting was called on the suggestion of the Parish Council to consider what steps should be taken to commemorate the war and the men who had lost their lives fighting in it. At this meeting, according to a contemporary report in The Wetherby News, Mr H. Twidale, Clerk to the Parish Council, announced that the council suggested that an institute should be erected as a permanent memorial to those fallen men. The Council and the Vicar, the Rev H.B. Beckwith, had clearly done their homework, as they had already identified a certain piece of land of about one acre â Brewertonâs Garth â in the centre of the village. This land was in the possession of the Lady Hastingâs Trust, and it was considered that an existing building on the site, which was used for storing straw and grain, would form the basis of the proposed institute.