Before the First World War the British Army had offered four forms of recruitment. A man could join the army as a professional soldier of the regular army, as a part-time member of the Territorial Force, as a soldier of the Special Reserve or he could join the National Reserve. Regular soldiers had to be taller than 5 feet 3 inches, aged between 18 and 38 (although he could not be sent overseas until he was aged 19) and he had to pass certain physical tests. The recruit had a choice over the regiment he joined and he typically joined the army for a period of 7 years full time service with the colours, to be followed by another 5 in the Army Reserve. The Special Reserve provided a pool of trained reservists in addition to those of the regular Army Reserve. Service in the Special Reserve was part-time military service. Special Reservists enlisted for 6 years and could be called up in the event of a general mobilisation and to undergo all the same conditions as men of the Army Reserve. This meant that it differed from the Territorial Force (below) in that the men could be sent overseas. The Territorial Force provided an opportunity for men to join the army on a part-time basis. Territorial units of most infantry regiments and of each of the Corps (Artillery, Engineers, Medical, Service and Ordnance) were recruited locally. Men trained at weekends or in the evenings and went away to a summer camp. Territorials were not obliged to serve overseas, but were enlisted on the basis that in the event of war they could be called upon for full-time service ("embodied"). The physical criteria for joining the Terriers was the same as for the Regular army but the lower age limit was 17. Finally, The National Reserve was a register maintained by Territorial Force County Associations. Registration was voluntary but complex rules of eligibility applied. Its strength as at 1 October 1913 was 215,000 of all ranks. 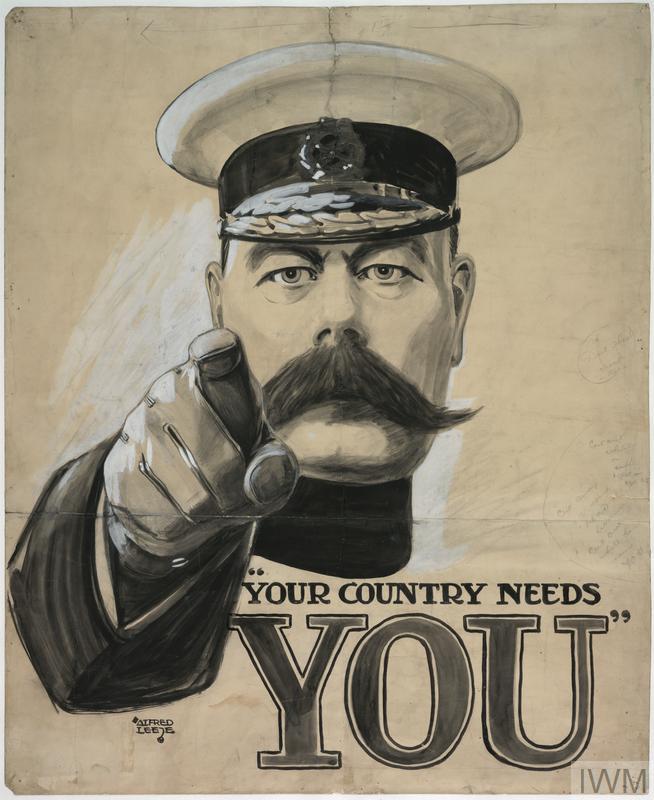 Shortly after the declaration of War, Field-Marshal Lord Kitchener was appointed as Secretary of State for War. He did not believe that the Territorial Force was an appropriate structure for increasing the size of the Army and so he issued his famous call for volunteers. The public response to Kitchener's appeal was rapid and at times overwhelming but soon died down to average only 100,000 men per month and steps were needed to maintain recruitment. It was still possible to enlist in the regular army, the Territorial Force or the Special Reserve but a new form of "short service" was introduced, under which a man could serve for "three years or the duration of the war, whichever the longer".

By spring 1915 it was clear that voluntary recruitment would not provide the numbers of men required to continue the war and the Government passed the National Registration Act on 15 July 1915 as a step towards stimulating recruitment and to discover how many men between the ages of 15 and 65 were available for recruitment. On 11 October 1915, Lord Derby was appointed Director-General of Recruiting and he brought forward a scheme to try to raise enlistment. This Group Scheme, often called the Derby Scheme, was half-way to conscription. Men aged 18 to 40 were told that they could continue to enlist voluntarily or attest with an obligation to come if called up later. The public was told that voluntary enlistment would soon cease and that the last day of registration would be 15 December 1915. Under the Derby scheme, men could be accepted for service and either serve immediately or could choose to defer their service and were sent back to their homes and jobs until they were called up. Men who attested under the Derby Scheme were classified into married and single status and into 23 groups according to their age. Each group was then mobilised in order from Jan to June of 1916.

Finally, to provide a steady stream of recruits the Military Service Act was introduced on 27 January 1916. All voluntary enlistment was stopped and conscription started. All British males were now deemed to have enlisted on 2 March 1916 if they were aged between 19 and 41 and resided in Great Britain (excluding Ireland) and were unmarried or a widower on 2 November 1915. Conscripted men were no longer given a choice of which service, regiment or unit they joined. This act was extended to married men, and the lower age dropped to 18, on 25 May 1916. A further extension of the Military Service Act was enacted on 10 April 1918, after a crisis of manpower provision and a large extension of the British section of the Western Front. This act reduced the maximum age of recruitment to 50 and allowed soldiers aged 18 years and 6 months to be sent overseas as long as they had had six months training.

Conscription ceased on 11 November 1918 and all conscripts were discharged, if they had not already been so, on 31 March 1920.

For a more detailed description of recruitment throughout the First World War see the excellent articles at http://www.1914-1918.net/recruitment.htm

On the 13th August 1914, nine days after war had been declared, The Wetherby News reported:

We have now been a week at war with Germany, and the country has settled down from a feeling of panic and awaits with quiet confidence the clash of arms. Little did the Nation think, when they were praying that brother might not lift up hand against brother in Ireland, that in one day their prayers would be answered by the Mailed Fist of Germany breaking treaties, which made it neccessary for us for our protection and the protection of Small States of Europe to declare War upon the German Empire.

Elsewhere on the same page was the following:

This was the first call to arms. By the 4th September 1914, the Wetherby News could report a local meeting to encourage enlistment:

An enthusiastic open-air public meeting, for the purpose of obtaining recruits, was held in Wetherby Market Place on Friday evening, with eminently satisfactory results, seventeen young men volunteering for active service, and this number was afterwards supplemented by other forty. The meeting was largely attended.

Two weeks later the Wetherby News could further report a meeting at Wetherby Town Hall which was attended by Lord Halifax and Mr Middlebrook, MP to further boost recruitment. These meetings were not confined to Wetherby and the Collingham Parish Magazine was able to report:

The Call to Arms at Collingham Parish Magazine October 1914

It was certainly a new venture to call a public Meeting at Collingham for this purpose, but one very necessary. The full report of the meeting has appeared in the Public Press, and a short report follows. Collingham is trying to do its best, and we know of some 14 who has tried to join the Force, either as Reservists, the Territorials, or Lord Kitchenerâs Army. This will not be apparently a short War, or one which can be taken lightly, and many more, we hope, will respond to the countryâs need for men.

Over the next few weeks, The Wetherby News published the names of local men from many villages who had answered the country's call. These men served over the next four years. Sadly many were wounded, injured or killed in action and never returned to their homes in West Yorkshire. Here we will try to remember the stories of some of these local men.