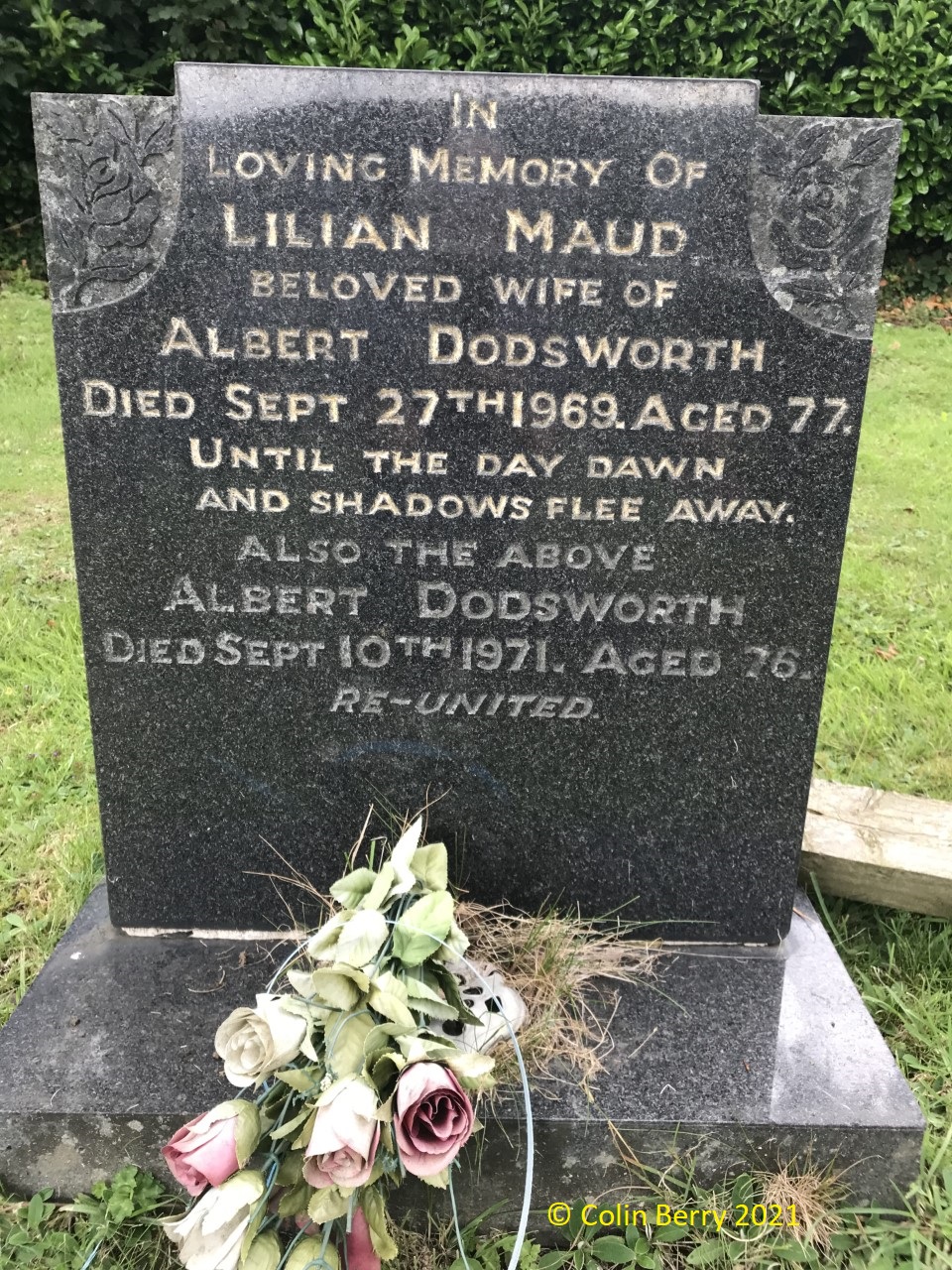 Other service during World War One
Information from Medal Index Cards (WO372), Medal Rolls (WO329), Service Records (WO363) and/or Pension Records (WO364) held by The National Archives.
Pre-war Occupation*/marital status**
Trade or Occupation pre-war: Farm horseman
Marital status: Single
* Taken from attestation papers or 1911 census
** Marital status on enlistment or at start of war
Connection with Collingham, Linton or Micklethwaite and reason for inclusion on this web site

Wetherby News April 27th 1917
LOCAL CASUALTIES
Pte. Albert Dodsworth, youngest son of Mr. and Mrs. Dodsworth, Micklethwaite, is in hospital in France suffering from serious gun shot wounds in the shoulder, received on April 9th. He enlisted in the Dragoons, but is attached to the King's Own Yorkshire Light Infantry.

Tracing Alfred and Nellie back to the 1901 census reveals the family in Beck Cottage in Stutton with Hazlewood. Alfred's wife was Mary Ellen Dodsworth and their children were Nellie, Henry, Chas and Albert. We believe this is the Albert Dodsworth we are seeking. By 1911, this Albert Dodsworth, born on the 9th November 1894 in Ryther, was working as a horseman in North Deighton.

There is one medal index card for an Albert Dodsworth in the King's Own Yorkshire Light Infantry with service numbers of 6809 and 203219. The medal roll for this man shows he served in the 1/4th Battalion King's Own Yorkshire Light Infantry, but it makes no mention of service in the Dragoons, this suggests that Albert transferred from the Dragoons before he served overseas.

Albert's service record has not survived, but his medal roll shows he was discharged from the Army on the 21st July 1919. This date is confirmed by Albert's Pension Ledger Card entry which shows him living at 33 Penshire Terrace, Llanfach, Abercarn. To build up a picture of Albert's early service we have had to explore other ways to understand when he might have enlisted and his early service. Here the medal index card and medal roll give some clues. Albert has two service numbers, the first, 6809, suggesting perhaps an early recruit. Secondly a search of the service records of men with service numbers close to Albert and finally a clue from the unit Albert joined. All of these pieces of information suggest that Albert may have been a Territorial Soldier before the war.

We have explored the service dates of soldiers in the King's Own Yorkshire Light Infantry with service numbers between 203150 and 203305 (Albert's second service number is 203219). For those soldiers who were awarded a Silver War Badge, or those whose service records were not destroyed in the Second World war we can find that these soldiers consistently had enlistment dates from August 1914 to September 1915. Indeed the man with a service number next to Albert, Private Frederick Winterton Duffield (203218) attested on the 10th December 1914. The early range of dates would almost certainly have been for men with previous relevant military experience. Albert joined the 1/4th Battalion of the KOYLI. Before the war each Regiment had Territorial Battalions. The 4th Battalion KOYLI being raised in 1908. The Territorial Force was established on 1 April 1908 as a volunteer auxiliary to the British Army. It was formed by the amalgamation of the former auxiliary institutions of the Volunteer Force and the yeomanry (a first possible mention of Yeomanry to link with Arthur's record). Designed primarily as a home defence force, its members could not be compelled to serve overseas unless they volunteered to do so. On the outbreak of the First World War in 1914, many did. At some stage 4th (TF) Battalions were often split into those men who volunteered for service overseas (1/4th Battalion) and the others (2/4th Battalion). Thus an early attestation date for Albert, coupled with his being in the 1/4th Battalion, suggests he was a Territorial before the war.

A final piece of evidence supporting the view that Albert was a Territorial before the war comes from information about the renumbering of the Territorial Force in 1917 (full information at http://longlongtrail.co.uk/soldiers/a-soldiers-life-1914-1918/renumbering-of-the-territorial-force-in-1917/renumbering-the-tf-infantry-in-1917/). This shows that the KOYLI service number block from 240001 to 265000 was reserved and used for TF men in the 5th Battalion KOYLI, whereas the block of numbers from 200001 to 240000 was used for TF soldiers in the 4th Battalion KOYLI. Albert's number, 203219, fits in this second block, again suggesting he was a Territorial Force soldier. Of course we still do not know when Albert first went overseas, but he was not awarded the 1914 or 1914-15 Star so his overseas service must have started after the 31st December 1915. However the 1/4th Battalion KOYLI first went to France in April 1915, so it appears certain that Albert joined the Battalion later.

On the date (9th April 1917) on which the Wetherby News says that Albert was wounded, the 1/4th Battalion King's Own Yorkshire Light Infantry were manning the front line in the Neuve Chapelle sector of the front. The war diary records:

Not long after his discharge from the Army, in 1919, Albert married Lilian M Lee in the Newport Market district of South Wales and he seems to have settled in that area. On the 22nd July 1920 they had a son, William E Dodsworth. By 1939, Albert, Lilian and William were living at 16 Twyn Place, Abercarn. Albert gave his trade as a Gas Slotmeter Collector while William was a sander in the tin works.

Albert died in South Wales on the 10th September 1971, aged 77, and he is buried in Abercarn Cemetery.