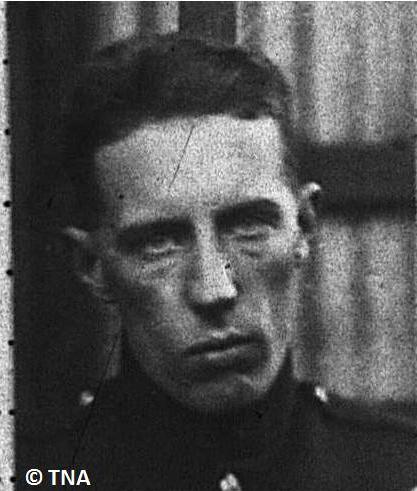 Other service during World War One
Information from Medal Index Cards (WO372), Medal Rolls (WO329), Service Records (WO363) and/or Pension Records (WO364) held by The National Archives.
Pre-war Occupation*/marital status**
Trade or Occupation pre-war: Merchant Navy
Marital status: Single
* Taken from attestation papers or 1911 census
** Marital status on enlistment or at start of war
Connection with Collingham, Linton or Micklethwaite and reason for inclusion on this web site

Dudley Earle Charlesworth Crowther was born on the 10th September 1896 in Halifax, Yorks, the eldest of four children of Dr Astley Brodie Crowther and his wife Madge. He was educated at Bradford Grammar School and in 1911, at the time of the census, he was living with his family at Luddenfoot, York. His father died in 1912 and by 1915, when Dudley enlisted, he gave his address (and his mother's) as Collingham Bridge and he is listed as an Absent Voter (due to Naval or Military Service) in both the 1918 and 1919 electoral rolls of Collingham.

Dudley's service record shows that he enlisted and attested in Harrogate on the 15th January 1915 and he was posted to the 21st Battalion of the Royal Fusiliers. After basic training, he was posted to France on the 14th November 1915 and served with this unit until 12th April 1916. The following day he was transferred to England to be commissioned as an officer. He initially joined the non-officers Cadet Battalion and after training was discharged to a commission as a 2nd Lieutenant attached to the King's Own Yorkshire Light Infantry (KOYLI) in Cambridge on the 4th September 1916. We are not certain at the moment when he went back to France, but he formally joined the KOYLI on the 13th September 1916.

Dudley's record is slightly confusing around this time, but he was taken ill with nephritis and infected tonsils early in January 1917 and travelled between the 19th and 20th January from Le Havre to Southampton on the Hospital Ship Glenart and was posted to the 7th Battalion. After treatment, rest and recuperation Dudley was sent to a medical board to assess his fitness. This first board, held at the 3rd Southern General Hospital, Oxford found his nephritis had made him unfit for medical service for 6 months. He continued to improve, but a further medical board on the 5th April 1917 thought he needed another 3 months to fully recover. However on the 12th May at a medical board in Hull, he was found fit to return to service, and on the 12th June 1917 he returned to service as a 2nd Lieutenant in the KOYLI.

On the 4th July 1917, Dudley arrived back in France at Boulogne and he joined a KOYLI battalion on the 13th July. On the 10th August 1917 he was admitted to No. 61 Field Ambulance and the following day was admitted to 14 General Hospital. He was suffering from the effects of having been gassed. His case meant that on the 12th he travelled via No. 31 Ambulance train and was admitted to No 8 General Hospital. His recovery allowed him to be transferred to 8 Mich Convalescence home where he stayed for about a month, until he was posted back to his unit on the 22nd September 1917. Dudley had leave from the 31st October to 10th November 1917, but only a few weeks after his leave ended, on the 24th Novemember 1917 he was again wounded on duty.

Dudley was admitted to hospital again on the 8th January 1918 - it is unclear whether this was a result of the November wounding, or yet another injury, but he was again admitted to hospital for a few weeks. On the 17th February 1918 he was attached to the 14th Entrenching Battalion and on 23rd February he joined F Depot for duty before joining 9th Battalion KOYLI between the 13th and 18th March 1918.

Only a few days later, on the 20th March, Dudley was posted to be a temporary Lieutenant in the 8th Battalion of the Rifle Brigade. This posting lasted until the 4th August 1918, when he returned to F Depot in Etaples and he rejoined the KOYLI - 9th Battalion - on the 27th August 1918. Three days later he was promoted to Acting Captain in charge of a company of the battalion. Dudley was with the 9th Battalion as an acting Captain when the war ended.

Dudley went on leave to the UK from the 17th December until 31st December 1918, but then on the 11th January 1919 he went to the 3rd Army Rifle Training School.

Dudley was awarded the Military Cross for his services on the 1st February 1919. His service continued when, on the 2nd April 1919 he was attached to 307 Prisoner of War Company. Finally, on the 30th October 1919 he returned to the UK for demobilisation and he was transferred to the Army reserve and was demobilised on the 2nd November 1919.

After the war, Dudley became a merchant seaman and gained his 2nd Mate's certificate (23rd December 1920), 1st Mate's certificate (18th February 1925) and late his master's certificate. Between the wars Dudley travelled a great deal and we have found his incoming and outgoing travel records for a number of trips:

Dudley continued as a merchant seaman and served in Merchant Navy in the Second World War. There he was on board the SS "Nowshera" which left Calcutta, India on 13th September 1940 bound for Australia and then home to the UK via Durban, South Africa. Her last port of call was Adelaide, S.Australia which she left on 10th November 1940. On 17th/18th November, steaming due west at 29 deg.S and some 500 miles due west of Fremantle, Australia she was intercepted by the German raider "Pinguin". Warning shots were fired to halt the "Nowshera" whereupon she was boarded and the crew of 16 white officers, 3 volunteer gunners and 103 Indian seamen were transferred to the "Pinguin" and the "Nowshera" was scuttled by the Germans.

Before a planned rendezvous with a German supply ship in order to transfer the prisoners, the "Pinguin" also accounted for three further British ships - SS "Maimoa", SS "Port Brisbane" and SS "Port Wellington". On 6th December 1940, the prisoners were transferred to the captured Norwegian tanker "Storstad" which then left the Indian Ocean bound for Bordeaux, France.

After a voyage of severe discomfort and hardship for the prisoners, the "Storstad" finally docked at Bordeaux on 4th February 1941. The prisoners were held in a POW camp outside Bordeaux until 12th March and then loaded onto trains finally arriving on 15th March at Stalag XB (Marlag und Milag Nord) near Westertimke, Germany where they saw out the war as guests of the Third Reich.

Dudley and the rest of the prisoners were finally liberated by the British Guards Armoured Division on 27th April 1945.

After the Second World War, Dudley continued in the Merchant Navy:

Some of the detail on the Pinguin raids was found on the internet at https://www.wrecksite.eu/wreck.aspx?223250