Pre-war Occupation*/marital status**
Trade or Occupation pre-war: Architect & Surveyor
Marital status: Single
* Taken from attestation papers or 1911 census
** Marital status on enlistment or at start of war
Connection with Collingham, Linton or Micklethwaite and reason for inclusion on this web site

Eric Vernon Wimpenny was born in Leeds in 1888, the youngest of three children of Joshua and Sarah Emma Wimpenny. Eric's elder siblings, Harold Edward (b.1877) and Sarah Emma (b.1878) were both 10-11 years older than Eric. Their father was a mechanical engineer. By 1891, the family were living at 9 Bayswater Grove, Potternewton, Leeds, but this was clearly a family that moved around - by 1901 they were at 26 Elford Place, Potternewton and in 1911 were at 3 Roseville Terrace, Manston, Leeds. In 1915, Eric was a lodger at Manston Gardens, Crossgates. A some stage pre-war, Eric had served as a city counselor in Leeds.

Eric joined the Royal Flying Corps in April 1917, but a few months later on the 11th September 1917, Eric married Blanche Gibson, the daughter of the publican of the Half Moon Hotel, Collingham.

The Yorkshire Evening Post September 12th 1917
LEEDS EX-CITY COUNCILLOR MARRIED.
The marriage took place, at St.Oswald's Church, Collingham, of 3rd Air Mechanic Eric Vernon Wimpenny, of the Royal Flying Corps, to Blanche, youngest daughter of Mr. and Mrs. W. Gibson, of Collingham.
The bridegroom, who is an ex-member of the Leeds City Council, is the son of the late Mr. Joshua Wimpenny, and of Mrs. Wimpenny, Thorner. The bride, who was given away by her father, wore a dress of ivory satin and georgette, trimmed with pearls and orange blossom. Her cousin, Miss Steel, was bridesmaid. 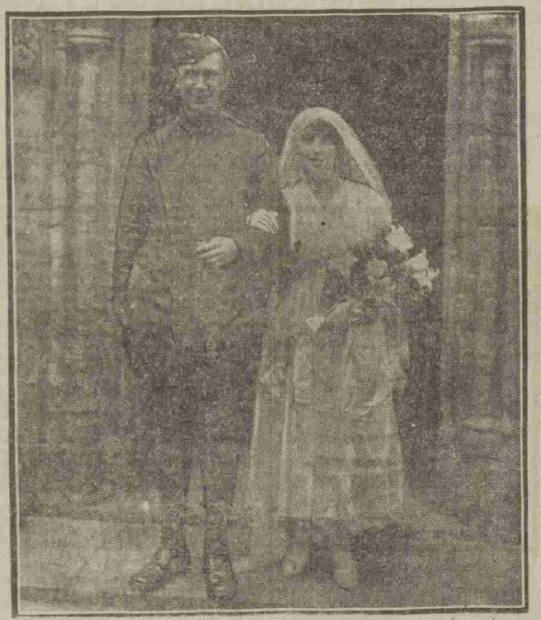 Eric's service record shows him joining the Royal Flying Corps as a 3rd Air Mechanic on the 18th April 1917. He had the service number 76995. On the 15th October 1917, Eric went overseas to France to serve, but his unit is not shown on his record. On the 1st April 1918, The Royal Air Force was formed and Eric was transferred to the RAF but remained in France. In 1918, Eric appears as an absent voter on the electoral roll for Bridge House, Thorner.

Eric was one of the many who went down with influenza in 1919, reporting from the front to 3rd Canadian General Hospital in Boulogne, on the 4th January 1919, and on the 17th January, he was evacuated back to England, going to Halton Camp. Eric recovered and was finally posted to the reserve on the 1st March 1919.

We loose track of Eric and Blanche for a few years, but from 1928 to 1932, they are on the electoral roll for East Rigton, Bardsey, then in 1933 at Woodgarth, East Rigton. They continue moving around the area - 1934 at Manor House, Scarcroft and 1936 at Golf Links Avenue, Tadcaster. Then on the 19th December 1936, Eric Vernon Wimpenny of Redcote, Wood Lane, Bardsey died aged 48.