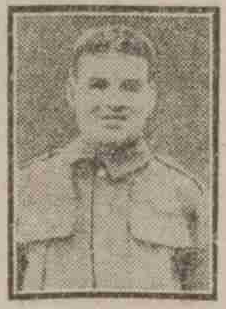 Other service during World War One
Information from Medal Index Cards (WO372), Medal Rolls (WO329), Service Records (WO363) and/or Pension Records (WO364) held by The National Archives.
Pre-war Occupation*/marital status**
Trade or Occupation pre-war: Joiner
Marital status: Single
* Taken from attestation papers or 1911 census
** Marital status on enlistment or at start of war
Connection with Collingham, Linton or Micklethwaite and reason for inclusion on this web site

Fred Tomlinson was born in Wetherby in 1890, the son of John Tomlinson a groom and his wife Mary. John was baptised on the 15th October 1890 in St. James' Church, Wetherby. In 1911, Fred was living at Micklethwaite with his parents. He was a joiner by trade. John was an early volunteer for service in the war, a Wetherby News article on the 23rd October 1914 reporting him as serving. Fred's service continued throughout the war and on the electoral roll for Micklethwaite in 1918, Fred is listed as being absent due to Naval or Military service.

Fred served in the Lincolnshire Regiment. His initial service number was 2646. A report in the Yorkshire Evening Post for 14th April 1915 gives the story of his recruitment and part of his exploits:

The Yorkshire Evening Post April 14th 1915
WETHERBY TERRITORIALS AT THE FRONT.
A NIGHT IN ADVANCED TRENCHES.

Writing from France under a recent date, George E Miller, a Wetherby lad, says: "Fred Tomlinson and myself joined the 5th Lincolns last September, and after six months' training at Luton and Stansted, we were drafted out here, being the first Territorials to come out as a Division.
"We were shipped across on February 28th, and after a few days in camp at Havre we were moved on a journey which occupied 22 hours by train1. We travelled first class, of course - in cattle trucks. We have been moved about from place to place, and last Wednesday much, to our pleasure, we were ordered to the trenches. We were only in 24 hours for instruction, but it was quite an experience, I can tell you. The bullets were flying in all directions. During the night we had to do two hours on sentry, and during the spare time had to fill sand bags, to build up the traverse, and repair the trenches all around. We also had to assist in building dugs-outs, and altogether had a good time. We were quite safe so long as we kept our heads down. One corporal got rather daring, and paid the penalty. That was the only casualty2.
"We had no shell fire to contend with, as our trench was too close to that of the Germans for them to shell it. We could hear them singing and talking during the night, and also at work. We were only 90 yards from them, and we had a listening patrol half-way across. We have nothing to grumble at out here, as regards food. We get plenty, but, of course, it is always the same, and we relish a bit of good English, when it arrives: which, thanks to those at home, it often does. We got our letters and parcels quite regularly. They only take three days to find us. Our happy home is usually a barn, or a cart under some shed, and we wash and cook for ourselves."
Notes: 1 The official history of the Lincolnshire Regiment reports that the 4th and 5th (Territorial Force (TF)) Battalions of the Regiment disembarked at Havre on the 1st March 1915. The 4th was commanded by Lieut.-Colonel J.W. Jessop, and the 5th by Lieut.-Colonel T.E.Sandall. Both battalions formed part of the 138th Brigade, 46th Division. Two or three days were spent at the Rest Camp, in Havre, and then the battalions travelled to Strazeele, arriving on the 9th March.
Between the 9th and 26th of March the 4th and 5th Battalions, Lincolnshire Regiment moved by stages to the front line. On arrival at Ploegsteert they were attached to the 11th Brigade (4th Division) for instruction in trench duties. The 4th Battalion had one man wounded on the 27th, which appears to have been their first casualty in France: the 5th had a man slightly wounded on the 28th and a corporal killed the day following.
On the 1st April the 4th Battalion were in billets at Le Kirlem and the 5th at Steenwerck. A few days later both battalions moved to Dranoutre, and on the 9th April into the front-line trenches, taking over a portion of the defences for the first time opposite Spanbrek Mollen.

2 This is Corporal 1281 Henry Procter Clark. He is buried in Lancashire Cottage Cemetery, Hainaut, Belgium. He was the foster-son of Mrs F. Turner of 1, The Terrace, Bourne in Lincolnshire.

We can gain some impression of what it must have been like for these Territorial soldiers in their first experiences of trench warfare in The Great War. The 5th Battalion War Diary gives a detailed description of the condition of the trenches that they moved into on the 9th March.

Trenches 9/4/15
Relief completed at 2.55am. This being the first time of taking over trenches, naturally the time taken was somewhat long. Extremely bad and muddy approaches to fire trenches through communicating trenches. Hope to carry out relief quicker when guides know the way thoroughly. If c. trench (communication trench) is bad, relief will not use them as men have to walk in mud over their knees and they have to carry rations etc. Drainage seems to have been sadly neglected. Floorboards ought to be put down as soon as mud is removed.
Trenches taken over are
F2 a fairly good trench, needs better parapet.
E2 a fairly good trench, needs better parapet.
E6 a dirty trench requiring a great deal of attention.
E3 a very wet and badly drained trench
E1 R a trench that smells very badly, needs enormous amount of improvement.
E1 L the worst trench of them all. Dead bodies are even half exposed in the parados
SP2 A supporting point in rear of E2. Needs improving
SP2 B supporting point in rear of F2. Needs improving

Two companies occupy the above fire trenches, other two companies are in support in dugouts about 1700 yards due E of E2
Bn. Hd. Qrs are in farm about 250 yards E of dugouts.
Enemy quiet all day. 2 men killed. CO and Adjutant visited all trenches at night.

What an introduction to war for troops almost fresh to trench warfare!

Another great fear was the tension engendered by the thought or knowledge that the enemy was preparing a mine which might go up at any moment beneath the trench in which they stood. Fred Tomlinson and the men of the 5th Battalion Lincolnshire Regiment went through this very feeling around the 26th of April 1915. Suspicions were aroused on that date by muffled noises beneath the trench heard by the mining officer near trench E1L and confirmed on the 28th by sounds of voices under ground. However nothing further happened until the 20th May 1915 when, at 3 pm, the Germans blew the mine, killing eleven men and wounding twenty-two others of the 5th Lincolnshires, four men also being "missing, believed killed." One officer (Lieutenant Dyson), who had been buried for fourteen hours in the debris, was recovered at 5 a.m. on the 21st, bruised, but sound and cheery.

On the 29th May 1915, The Leeds Mercury announced that Fred Tomlinson had not escaped the effects of this mine:

The Leeds Mercury May 29th 1915
WETHERBY MAN IN TRENCHES.

Pte. F. Tomlinson, of the 2nd (sic) Battalion Lincolnshire Regiment, youngest son of Mr. John Tomlinson, Micklethwaite, Wetherby, has been seriously injured in the firing line. A letter received from the Field Chaplain states that Tomlinson was rather seriously crushed. He was in a trench which was mined, and the sandbags fell on him and others, bruising and crushing them.

Fred's injuries would certainly have needed hospital treatment and time for recovery, but later he returned to the 5th Battalion Lincolnshire Regiment, with a new service number of 240581.

We have found that Banns of Marriage for Fred were read on the 11th, 18th and 25th November 1917 in St. Oswald's Church Collingham for his marriage to Ethel Dowson, and they were read again in the same church on the 17th February, 24th February and 3rd March 1918. Frederick and Ethel appear to have married in the Darlington region in summer 1918.

After the war, Frederick returned to the UK. We have not found record of him until 1939, when the National Registration Act records Frederick as living at The Cottage as the foreman of the estate at Greta Bridge near Barnard's Castle, at the time in North Yorkshire, now in County Durham. Frederick was playing a role ready for World War 2 as Billeting Officer and a member of the Air Raid Protection (ARP). Ethel was also living with Fred at The Cottage, as was her father, Frederick Dowson, a retired carpenter.