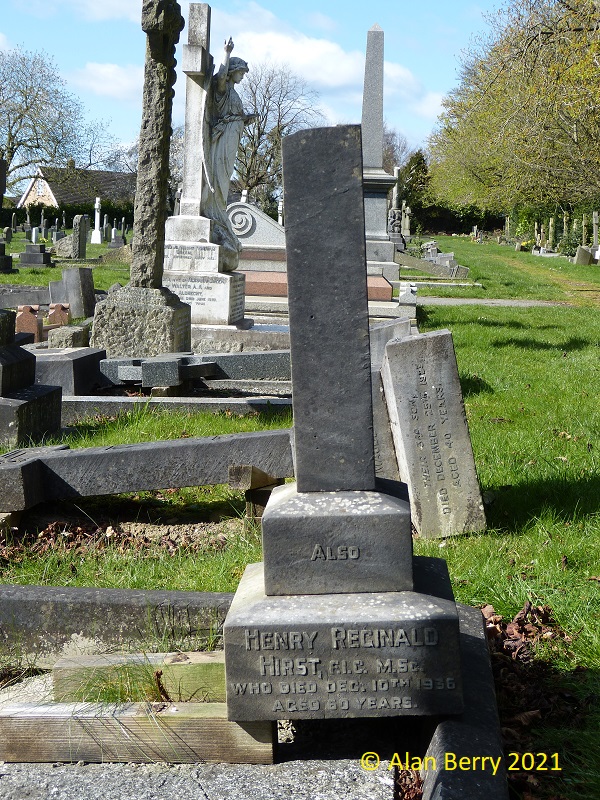 Pre-war Occupation*/marital status**
Trade or Occupation pre-war: Director of woollen mill
Marital status: Married
* Taken from attestation papers or 1911 census
** Marital status on enlistment or at start of war
Connection with Collingham, Linton or Micklethwaite and reason for inclusion on this web site

Henry Reginald Hirst was born in Batley in 1876, the eldest son of the late Mr. G. H. Hirst, owner of G. H. Hirst & Co., Ltd., a well-known woollen mills, and a Mayor of Batley. Henry was educated at the Wheelwright Grammar School, Dewsbury, and then went to the University of Leeds, where he graduated with a B.Sc., Honours in Chemistry, in 1905.

Henry married Dorothea Foster on the 12th March 1903 at Whitkirk, Yorkshire and gave his trade at the time as a woolen manufacturer. By 1911, at the time of the census that year, Henry was living at Bank House, Stanicliffe, Batley with his wife and two daughters, Joan Foster Hirst and Margaret Foster Hirst. That night Henry's sister in law, Iline Vera Foster, and a servant, Florence Swaley were also in the house. Dorothea, who had been born in Leeds, the daughter of the artist (William) Gilbert Foster RBA (1855-1906) was also an artist.

On leaving Leeds University, Hirst entered the family business and here laid the foundations of his wide knowledge of technical processes in the woollen industry. Despite the fact that during the war his firm were busily employed on army clothing contracts, he was anxious to take a more active part and he joined the forces in 1915. After a period of general training he joined the Royal Army Ordnance Corps and was posted to the ordnance inspection depot near Rouen, where he was responsible for the examination of all types of ammunition passing through the centre.

He received official recognition for "Coolness and gallant conduct at an ammunition base on July 3rd, 1917, in helping to put out a fire on board an ammunition ship."

In 1919, Henry was made a Fellow of the Institute of Chemistry of Great Britain and Ireland.

After the war, in 1920, Henry joined the newly formed British Research Association for the Woollen and Worsted Industries, now the Wool Industries Research Association, and at the time of his death was its chief Technologist. Hirst evinced an especial interest in finishing processes, and for research on such processes his experience gained in industry was most valuable. His interest in milling processes caused him to carry out fundamental work on the swelling of wool fibres when placed in various solutions, and more technical researches dealt with methods for increasing the rate of milling by suitable pre-treatment of the cloth, thus effecting a saving in time and enabling production to be increased. Much of his work concerned the elucidation of the causes of defects in materials, and in this work his interest did not cease with the resolution of a particular problem, but he was at all times keenly alive to the desirability of devising methods for the prevention of such defects. He was a pioneer in the study of the causes and prevention of mildew and worked out satisfactory methods for its prevention and made clear the conditions under which wool is liable to mildew attack. Perhaps his greatest interest was in dyeing processes and related problems. In 1925 he suggested a general scheme of test to be applied in the determination of fastness of dyes to wool to various agencies, eg., light, washing, perspiration, stoving, etc. He was a member of the Committee of the Society of Dyers and Colourists which in later years initiated and carried out comprehensive investigations on standard methods of test for fastness to light, washing, and perspiration for all types of coloured textile materials. The demands of his work led Hirst to develop new analytical methods and he was ever ready to take advantage of advances in other branches of science and apply them to his own particular problems. An outstanding example of this is the great use he made of ultraviolet radiation as an aid in textile analysis, especially in the examination of oil stains, He was greatly interested in photography both as a hobby and as an aid in his work, and at the time of his death was developing the methods of fluorescence photography for the examination of defects caused by oil stains.

Throughout this early post-Great War era, Henry and family were living at The Bungalow, Collingham, but in 1922 the family moved to Clifford Moor, Clifford.

Unfortunately, by 1924, Henry and Dorothea's marriage had broken down and they divorced. In 1929, Henry received the degree of M.Sc.

On the 10th December 1936, although apparently in excellent health, Henry had a sudden heart attack and died at his home in Clifford. He was buried at Harlow Cemetery, Harrogate on the 12th December 1936.