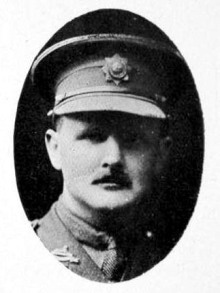 Commemorated at: Thiepval Memorial to the Missing of the Somme

Other service during World War One
Information from Medal Index Cards (WO372), Medal Rolls (WO329), Service Records (WO363) and/or Pension Records (WO364) held by The National Archives.
Pre-war Occupation*/marital status**
Trade or Occupation pre-war: Tea planter
Marital status: Single
* Taken from attestation papers or 1911 census
** Marital status on enlistment or at start of war
Connection with Collingham, Linton or Micklethwaite and reason for inclusion on this web site

James Herring Parkinson was born on the 9th May 1885 in Collingham, the son of William Henshaw Parkinson and his wife, Ada Wellesley Parkinson. James was baptised in Collingham church on the 15th June 1885. By 1891, Walter and Ada had moved with their family to live at Rockville, Embsay, and by 1901 a further move to Beckenham in Kent had taken place. In 1901 James' brother Arthur was a midshipman in the Navy, while James was a schoolboy.

James was educated at Dulwich College and then went to Messrs Donald Currie & Co's office for two years before he went to Ceylon and worked in tea planting. From there he went to Travancore where he became superintendent of the Koramvatabalam Estate. During his time in Ceylon (now Sri Lanka) served from 1st May 1909 to 23rd May 1911 as a private in the Ceylon Plantation Rifle Corps.

Back in the UK, when war was declared he enlisted in the 8th Service Battalion of the Rifle Brigade but then transferred to the Royal Flying Corps as a second aircraft mechanic and he went to France on the 2nd April 1915 attached to No 7 Squadron. This squadron spent most of the First World War in observation and interception roles. 7 Squadron deployed to France in April 1915. The squadron flew Royal Aircraft Factory R.E.5s for reconnaissance and Vickers Gunbuses as escort fighters. During the time James was with 7 Squadron, Captain John Aidan Liddell won the Victoria Cross for his actions on 31 July 1915, when he continued his reconnaissance mission over Belgium after the aircraft was hit by ground fire, the aircraft being badly damaged and Liddell suffering a broken thigh. Although he successfully recovered the R.E.5 to allied lines, saving his observer, he died of his wounds a month later.

In 1916, the squadron re-equipped with B.E.2s which it used for both bombing and reconnaissance during the Battle of the Somme that year, although by that time James had left the RFC having been granted a commission in the Lincolnshire Regiment.

After officer training in the UK, James Parkinson returned to France in time for the Battle of the Somme, and on the second day of the battle (2nd July 1916) he was Killed in Action near Fricourt.

James' body was not found or identified after the battle and he is commemorated on the Thiepval Memorial to the Missing of the Somme.