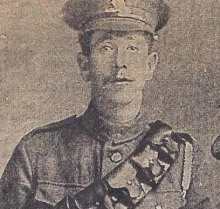 Paver Wainwright Dalby was born in Collingham on the 29th June 1890, the son of Eleanor Dalby and an unknown father, and is marked as being Absent due to Naval or Military Service in the 1918 Electoral Roll. Unfortunately Paver's service record has not survived, so we have had to piece his record together from other sources.

The 1911 census shows Paver was living with his widowed grandmother, Eliza Morrell, at Bridge House, Collingham. At some point Paver worked as a farmer and market gardener at Bridge House Farm. Around 1914, he met Martha Alice Cotteman. She had moved to Collingham from Doncaster and became a housemaid for Miss Metcalfe at the Dower House. From a report on their Diamond Wedding Anniversary we know they first met at St Oswaldâs Church and by 1915 they were thinking of marriage because Paver, who by then was in the Royal Garrison Infantry, was to be ordered overseas. They were married in St Lawrenceâs Church, York on the 30th September 1916.

Before his posting overseas, Paver attended and witnessed the marriage certificate of William Edward Stainthorp and Ada Wilson at Bardsey Church on the 23rd Jun 1917, just a few weeks before we think he went overseas.

Paver's medal record card shows he served as a Gunner in 12 Mountain Howitzer Battery of the Royal Garrison Artillery. This was a battery of 3.7 inch howitzers, which joined VIII Mountain Bde RGA at Catterick on 11 July 1917. This battery began a move to Egypt, sailing from Southampton on 23 August 1917 and concentrating as a Brigade at Sidi Bishr. It transferred to IX Mounted Brigade on the 26 January 1918. The 3.7 inch Howitzer was designed to be broken into eight mule loads, for transport over difficult terrain. The heaviest single section was the interrupted screw breech, which weighed 247 pounds (112 kg). Given an open gun position, a practised crew could have the guns unloaded from the mules, reassembled and deployed ready for action in barely two minutes. The 3.7-inch howitzer's adjustable suspension system allowed it to be deployed on almost any position, even those too uneven or with too steep a gradient to allow field artillery to be sited. The process of removing the howitzer from a position and reloading it onto the gun mules involved much more lifting and securing loads than deploying it, but could be accomplished in three minutes in favourable conditions.

After the war, Paver and Alice lived in the Wetherby area - in 1939 for example they were at 22, Main Street, Wetherby. As mentioned Paver and Alice celebrated their Diamond wedding anniversary in 1976 when he was aged 86. Paver died in 1981.