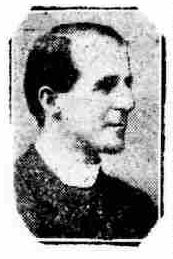 Pre-war Occupation*/marital status**
Trade or Occupation pre-war: Vicar
Marital status: Married
* Taken from attestation papers or 1911 census
** Marital status on enlistment or at start of war
Connection with Collingham, Linton or Micklethwaite and reason for inclusion on this web site

On the 29th September 1916, the death of the Vicar of Collingham, the Rev. Charles E. Medhurst was announced in The Wetherby News.

Wetherby News September 29th 1916
Death of the Vicar of Collingham.

The death took place yesterday (Thursday) morning, of the Rev. Charles E. Medhurst, vicar for ten years of St. Oswald's, Collingham, before that for two years vicar of Thorparch, and prior still to that vicar of Smethick, in the diocese of Lichfield. At the latter place he worked exceedingly hard and did good work, with the result that his health was undermined. Here Mr. Medhurst had charge of a parish, single-handed, of about 10,000 souls, and built mission room, church schools, etc.
The rev. gentleman was an M.A. of Durham University, and at the time of his death was 56 years of age. He had been in failing health for fully two years, but more so particularly during the last few months. He leaves a widow, two sons (one married), and one daughter who married a son of the Bishop of Beverley, her husband now being in Egypt. The younger son is a Flight Commander in the Royal Flying Corps, and has been mentioned in despatches for gallantry.
Deceased, who was a connection of the Hastings family, was a member of the Lady Hastings' Trust. We understand that the internment will take place at Collingham.

The search for the next vicar then started and by the 9th February 1917, the Rev. Philip J. Kelly was being installed as the next Vicar of Collingham.

In the presence of a large congregation the Rev. P.J. Kelly, M.A., late Rector of Whitwood Mere, was instituted to the living of Collingham by the Lord Bishop of Knaresborough, and inducted by the Rural Dean, the Rev. M.G. Lascelles, M.A., at three o'clock on Saturday afternoon last.
The clergy, having robed in the Vicarage, were met at the Church gate by the choir. A processional hymn was sung immediately the choir entered the Church. The quaint ceremony was followed by an interested congregation, to whom later the Bishop in his remarks made a strong appeal for sympathetic cooperation with the new Vicar. He emphasised the fact that the pastoral work of a parish was not entirely the work of the parson, but that likewise the people had their responsibilities, and can do much to help their Vicar in his work.
The following clergy were present in addition to the Bishop, the Rural Dean, and the new Vicar:- The Rev. C.V. Stillingfleet, rector of Kirk Deighton; the Rev. T. Humphrey Edwards, vicar of Bardsey; the Rev. J.P. Whitworth, vicar of Thorner, and the Rev. J.P.D. Chapman, curate-in-charge at East Keswick.
Mr. Hamar was an efficient organist, and the work of the choir was much appreciated.

Philip James Kelly had been born on the 24th August 1881 at Rushen on the Isle of Man, the son of William Kelly and his wife Ann (nee Roberts). Philip was educated at Cambridge University, being at Queen's College in 1902 and obtaining a 2nd Class degree in the Theology Tripos in 1903. Philip Kelly had been at North Ormesbury, 1905-1907, Hessle, 1907-1910, St. Mary Walkley, Sheffield, 1910-1911 and Rector of Whitwood Mere, 1911-1916. In 1909, Philip married Ellen Conway in Middlesborough and they had 4 children - Nancy and Joan Conway Kelly, both born in Hessle in 1910, William Frederick Paul Kelly, born in 1912, and Phillipa Kelly born in 1914. In 1911, Philip and family were living at 6 Steel Bk Villas, Spring Vale, Sheffield. When Philip moved to Collingham in late 1916, he came to the Vicarage with his wife and a number of young children.

The village and church life would have settled into a routine of services and pastoral care, but in September 1917 that routine was shattered. The story was widely reported in local newspapers as far apart as as Hull, Driffield, Sheffield, Devon, Aberdeen, London, Dublin, Belfast and Birmingham. The Wetherby News reported the story on the 28th September 1917:

THE VICAR SAID TO HAVE JOINED THE ARMY.

We believe that the Rev. Philip James Kelly served as Gunner 180599 in the Royal Garrison Artillery.

The "Collingham Sensation" was not over yet - The Wetherby News takes up the story:

A sequel to the sensation caused by the disappearance of the Rev. Philip James Kelly, Vicar of Collingham, who joined the Army as a gunner in the R.F.A., was heard on Friday, when that clergyman was unfrocked at a Consistery Court held at Ripon Cathedral.
The Court was called in the terms of a notice "to give sentence on the Rev. P.J. Kelly upon his confession of immoral conduct." The Bishop of Ripon (Dr. Drury) presided, and the Court also included the Rev. M.G. Lascelles (Vicar of Harewood and Rural Dean of Wetherby).
The Registrar of the Court briefly announced that the regulations of the Clergy Discipline Act had been observed by Mr. Kelly, in admitting the offence and consenting to sentence being passed.
The Bishop, before passing sentence, emphasised most strongly the serious nature of the offence committted by Mr. Kelly, the scandal and sorrow caused in the social life of the village, and the hurt done to the church of God. It was, he said, a most painful duty laid upon him to exercise the discipline entrusted to a Bishop to carry out, but he could not do otherwise.
The following sentence was then pronounced by the Bishop:-
The Rev. Philip James Kelly, clerk in holy orders, vicar of the parish church of Collingham in the diocese of Ripon, who has consented under the terms of the Clergy Discipline Act of 1892 to my giving sentence upon him: I hereby, in the exercise of the authority committed to me as Bishop of this diocese, pronounce that the said Rev. Philip James Kelly be deprived of the vicarage and benefits of Collingham on the ground of gross moral misconduct, and further declare him to be incapable of holding any church preferment until such time as it may seem fit to those who have authority in the matter.
Mr. Kelly left Collingham Hurriedly to join the Army, and he is now serving in the Royal Garrison Artillery. On the Sunday before his departure, he did not take service at the Church, pleading indisposition, but the real reason was probably that he feared the possibility of being denounced from the body of the church. He left a wife and six children.
We were informed some weeks ago by a Wetherby lady, that when travelling to Llandudno on the day Mr. Kelly disappeared, she saw him leave the train at Manchester in the company of a lady.

We do not have precise details of the unit(s) in which Philip Kelly served, or of where he served, but the newspapers, obviously interested in the story, must have tracked him down and interviewed him:-

The Birmingham Daily Mail September 28th 1917
WHY HE JOINED UP.
THE REV. GUNNER P.J. KELLY.

The Rev. Philip James Kelly, vicar of Collingham, Yorkshire, who left his parish living worth Â£500 a year, about a fortnight ago to enlist, is serving in a signalling section of the Royal Garrison Artillery at one of the forts in the vicinity of Portsmouth.
His wife and six children are staying in the neighbourhood.
Seen yesterday the Rev., now Gunner, Kelly, who was, of course, in khaki, looked very "fit" and he appears perfectly well satisfied with the step he has taken.
"I have always held and preached," he said, "that it is the duty of the clergy of military age to serve in the Army or Navy as combatants, either in the ranks or as commissioned officers. That was my principal reason for joining the ranks."
He added that during the last three years he had been anxious to join up, and had at last done so. Accordingly, on leaving Collingham, he went to Chester, where he enlisted. That was on September 21, and he had been sent on to his present depot for training. He had only joined for the period of the war.
Replying to a question as to how he liked soldiering, Mr. Kelly said he found it "a bit rough," but he got on wonderfully well with his comrades. In fact, he said, there was a fine spirit of comradeship among them, and he found many men of superior attainments in the ranks.

In 1939, his address is listed at The Vicarage, Acocks Green, and he is noted as vicar to that parish and Chaplain to the 62nd Division Royal Engineers. At Acocks Green, Philip Kelly again came close to the effects of war. The wikipedia entry for St. Mary's Acock Green says:

The pulpit is on the right, but was originally on the opposite side. At 8.20 pm on 10 December 1940, a bomb landed in the nave, in front of the lectern, destroying the east window and all the other stained glass in the church. A confirmation class had recently gone to the cellar of the vicarage, then situated in what is now St. Mary's Close. Revd. Philip Kelly collected the pieces and gave them to the art gallery for safekeeping. The incendiary bomb destroyed the roof and many internal features, although the structure was unaffected.

The Rev. Philip James Kelly died in 1956 and is buried in Acocks Green.