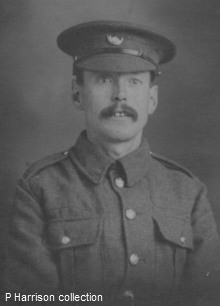 Walter Bootland was born in Collingham on the 7th October 1875, the third of nine children of William and Elizabeth Bootland and the eldest son. Walter married Christiana Westoby on the 1st September 1900 in the Weslyan Chapel in Wetherby, but by the census date in 1911, Walter and Christina were living at 12 Standard Terrace, Nothallerton with their children Edward, Eric Adkin and Winifred, as well as Walter's sister-in-law, Minna Westoby. At the start of the war we think Walter was living in Bridlington. A fourth child, Raymond, just missed appearing on the 1911 census, being born on the 27th April, 25 days after census day.

In 1917, while Walter was serving in India, his eldest son, Edward, won a prestigious award, reported in The Hull Daily Mail:

Hull Daily Mail July 11th 1917
"JACK CORNWELL" MEDAL
WON BY BRIDLINGTON BOY.
In the Boys' Naval Brigade competition, which took place last Saturday afternoon at the R.N.V.R. Drill hall, Lambeth, London, the "Jack Cornwell Medal" was won by Second Class P.O. Edward Bootland, of Bridlington. There were Boys' Brigades from all parts of the country, and the Cornwell competition was for general seamanship, in which young Bootland scored 80½ points out of a possible 100. The medal is for annual competition, and it need hardly be said that Commander G.F. Forster of the Bridlington Boys' Brigade, is greatly delighted to know that it has been won for the first time by one of his boys.

Unfortunately, just four months later, the newspaper was reporting a much sadder occurrence:

Hull Daily Mail Novermber 10th 1917
NAVAL BOY'S FUNERAL
On Thursday afternoon, the Bridlington Boys' Naval Brigade (Commander Fewster in charge) attended the funeral of Edward Bootland, a Brigade boy, and winner of the Naval Brigade shield and medal. This bright young boy, only 16, was on the staff of the "Bridlington Chronicle". He contracted pneumonia, and died in hospital after a short illness. The father (Private Walter Bootland) is in India and Edward was the oldest of four children. The first part of the funeral service was in the Wesleyan Church, conducted by the Rev. C. Pearson, M.A., and the Rev. J.L. Grice. The coffin, draped by the Union Jack, was carried to its last resting place by six Brigade Boys, and buglers from the Yeomanry sounded the "Last Post". The mourners were Mrs. Bootland (mother). Eric Bootland (brother), Mr. Bootland (grandfather), Mrs. Marshall, Mrs. Westoby, Mrs. Hudson (aunts), Mrs. Hodgson, Mrs. Burton, and Mrs. Fenby. Beautiful floral tributes were sent, including a floral anchor from the Boys' Brigade, and a wreath from the "Chronicle" Office staff.

In August 1918, the family suffered a further shock when Walter's younger brother, Arthur, was killed in action serving in France.

However further tragedy was still to strike. In 1918, Walter died at Campbellpore, India of influenza on the 4th November 1918, one week before the war ended. He was the last of the Collingham men to lose their lives in the Great War. 1918 flu pandemic in India was the outbreak of an unusually deadly influenza pandemic in India between 1918â1920 as a part of the worldwide Spanish flu pandemic. Also referred to as the Bombay Influenza or the Bombay Fever in India, the pandemic is believed to have killed up to 17 â 18 million people in the country, the most among all countries.

According to the Commonwealth War Grave Commission (CWGC), Walter is buried in grave N4 in Campbellpore Cemetery. Campbellpore (or Campbellpur) now lies in Pakistan and in 1978 changed its name to Attock. The CWGC has found it impossible to adequately maintain a number of cemeteries in this region, including Campbellpore, and Walter is therefore commemorated on the Karachi War Memorial. The 1914-1918 Memorial is located at the rear of the cemetery opposite the entrance feature and it commemorates 575 Commonwealth casualties. Initially the memorial was designed to commemorate those who served in garrisons and died in Pakistan (formerly part of India) during the 1914-1918 War and who lie buried in civil and cantonment cemeteries there, excluding those graves lying west of the river Indus who it was decided would be commemorated on the Delhi Memorial (India Gate). However, due to difficulties in adding to the Delhi Memorial (India Gate) in recent years, some casualties who are known to have been buried in sites west of the river Indus have subsequently been added to this memorial instead.

Christiana was left with her memories of her husband, Walter, and her son, Edward, but still had three children aged 15, 13 and 7, to bring up.