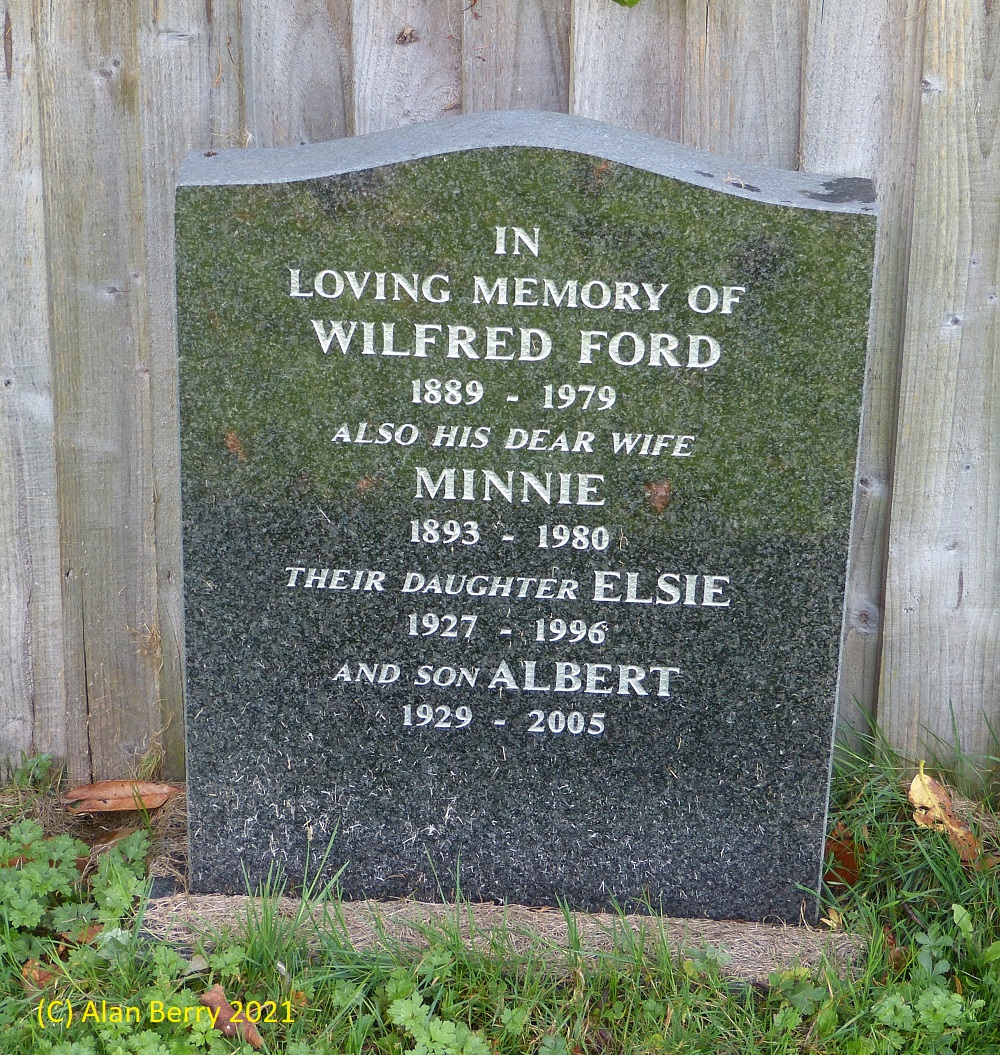 Pre-war Occupation*/marital status**
Trade or Occupation pre-war: Farm labourer
Marital status: Single
* Taken from attestation papers or 1911 census
** Marital status on enlistment or at start of war
Connection with Collingham, Linton or Micklethwaite and reason for inclusion on this web site

Wilfred Ford was born on the 12th October 1889 in Harome, near Helmsley, Yorkshire, the eldest son of William and Hannah Ford. The Ford family was a large family and Wilfred had 6 brothers and 3 sisters, one of whom, William Henry Ford, also served. William was a horseman on a farm and a number of the Ford sons grew up working as farm labourers. The family moved around a bit, from farm to farm and location to location. In 1901 Wilfred was living with his family at Leeds Road, Thorner, but by 1911 he was a farm labourer boarding at Compton, Collingham.

Wilfred's service record has not survived but a trace of his service exists on the Marriage Register for St. Peter's Church, Thorner on the 7th May 1918. On that day Wilfred married Minnie Fletcher (1893-1980) and gave his occupation as "Soldier 197 of the 17th Northumberland Fusiliers". We don't know when Wilfred joined the Army but his medal record card gives his service number as 32/197, indicating that his first service was with 32 Battalion Northumberland Fusiliers, while his service overseas was with 17th Battalion.

32nd (Reserve) Battalion of the Northumberland Fusiliers was formed at Ripon in November 1915 from the depot companies of the 17th Battalion as a Local Reserve battalion in the 19th Reserve Brigade. Given Wilfred's low service number he may have joined in late 1915 as the Battalion was forming. In December 1915 it moved to Harrogate and in June 1916 to Usworth, Washington. On 1 September 1916, it became 80th Training Reserve Battalion, 19th Reserve Brigade at Newcastle. At some stage Wilfred was posted to 17th Battalion Northumberland Fusiliers. This battalion was also known as the N.E.R Pioneers - it was a Pals battalion, raised by the North Eastern Railway at Hull in September 1914. It became a pioneer battalion on 11 January 1915 and was assigned to the 32nd Division at Catterick in June. It was taken over by the War Office on 1 September 1915, and landed at Havre on 21 November with 32nd Division. On 19 October 1916 it moved to GHQ Railway Construction Troops, on the 2nd September 1917 back to 32nd Division, and on 15th November back to GHQ Railway Construction Troops and finally on 31st May 1918 to 52nd (Lowland) Division as Pioneer Battalion where it remained until the end of the war. It was disbanded at Newcastle on 27 June 1919.

Since Wilfred's record has not survived we cannot be sure he served continuously with the battalion, and he was clearly back home on the 7th May 1918 when he married, but the battalion took part in the following battles with 32nd Division:

We also do not know when Wilfred was released from Army service.